The Original Bambinos Cafe on Delmar 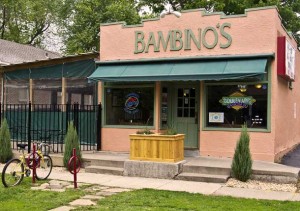 According to local lore, the original use of the building that is currently occupied by our restaurant was that of a corner grocery serving the surrounding neighborhood. The store was built during the 1930s at a time when reliance on cars for was not as prevalent as it is now.

Like most everywhere else in the United States, Springfield has suffered from the disquietude of sprawling auto-oriented development that has left many craving a new urbanism that reflects the unique situation that is Bambinos.

Whether you walk, bike or drive here, you will be able to relax in a place that seems off the beaten path but still very much in the midst of it all.

In 2015, we opened our second location at the intersection of Battlefield and Lone Pine in the historic Half A Hill shopping center just off the Galloway Creek Greenway.

This location has roots that go back to 1920 when Lone Pine was still a dirt road. Half-a-Hill was originally a tavern and restaurant known for their dance hall and fried chicken meals. The original Half-a-Hill was torn down in 1978 after a massive flood.

Bambinos on Battlefield has all of your traditional Bambinos favorites in addition to a wonderful selection of desserts from our bake shop.

Bambinos on Battlefield also has a great patio where you can relax and enjoy your meal.